The Keweenaw Bay Indian Community developed their hazard mitigation plan in partnership with the Western Upper Peninsula Planning and Development Region, and with guidance from the Dibaginjigaadeg Anishinaabe Ezhitwaad: A Tribal Climate Adaptation Menu—a framework for integrating Indigenous and traditional knowledge and practices into climate adaptation planning. Dione Price and Rachael Pressley’s combined knowledge and experience helped guide their approach to facilitating an inclusive hazard mitigation planning process that ensured Indigenous culture, knowledge, science, kinship, and perspectives were incorporated into the plan.

“My team understood the importance of slowing down and ensuring our engagement was built on respect and reciprocity.” 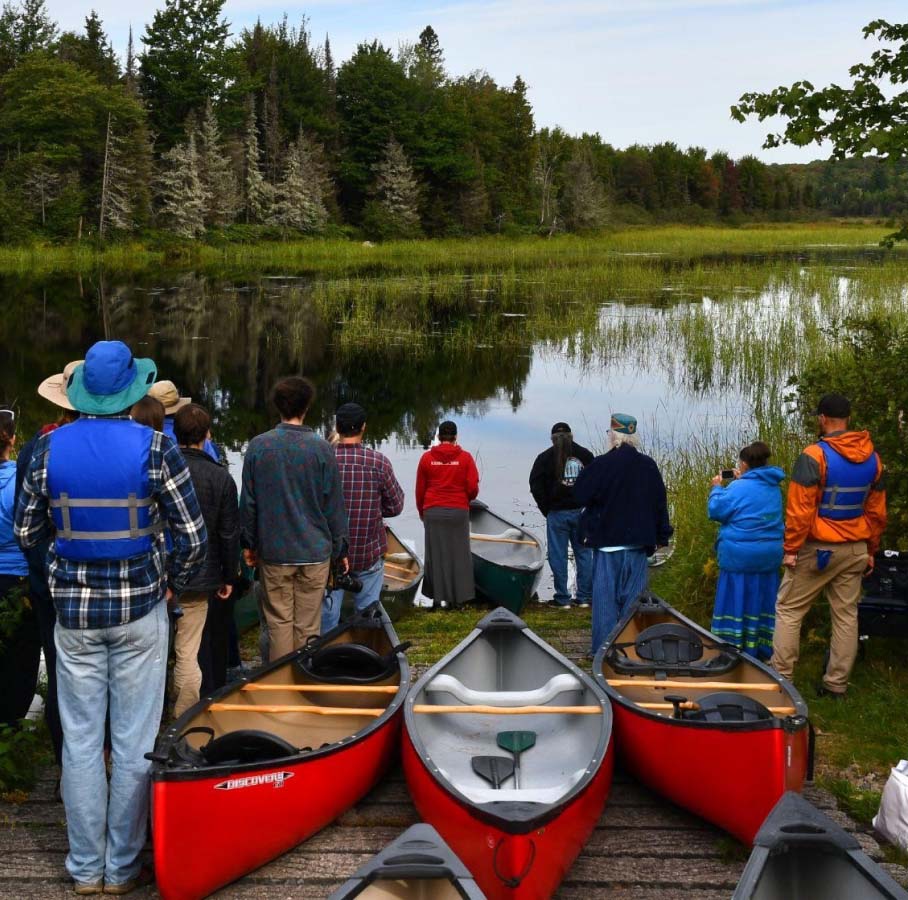 About the Keweenaw Bay Indian Community

The Keweenaw Bay Indian Community Lake Superior Band of Chippewa Indians are part of a larger Native American nation known as the Anishinaabeg. The Anishinaabeg are one of the largest tribes in North America, with nearly 150 different bands living in the present-day United States and Canada. The Anishinaabeg are currently known by many different names: the Chippewa, Ojibway, Ojibwe, or Ojibwa, as well as the Ottawa or Odawa and Potawatomi. Each band has its own cultural identity, but all still refer to themselves as “Anishinaabe.” The Anishinaabe originated from the Great Salt Water (Atlantic Ocean) on the eastern shores of North America.

The Keweenaw Bay Indian Community is the signatory to two treaties made with the United States, which recognize them as a sovereign nation. The 1842 treaty reserved Keweenaw Bay Indian Community’s existing rights to hunt, fish, gather, and worship within the ceded territory in perpetuity. The 1854 treaty established the L’Anse Indian Reservation. The treaties ensured that the Anishinaabe have access to the resources necessary to perpetuate their accustomed living then, and for as long as there are Anishinaabe. The L’Anse Reservation contains about 59,000 acres located mainly in Baraga County, Michigan, on the southern part of Lake Superior. There are 3,587 tribal members.

The Keweenaw Bay Indian Community Hazard Mitigation Plan states, “Water plays an integral role in the lives of the community. The people of Keweenaw Bay Indian Community have a long and deep place-based cultural connection with the water, wetlands, forests, and all beings within it. The community embraces the responsibilities given to them in the first treaty with creation to be good stewards of the land and all beings within it. They recognize that they are nurturing, protecting, maintaining, and healing the natural environment not only for the current community, but for their children down through the future seven generations.”

The Keweenaw Bay Indian Community is concerned with how the impacts from climate change and coastal hazards may disrupt Anishinaabe culture. The community is already being impacted by coastal hazards such as flooding, erosion, legacy mine waste, and extreme temperatures. Flooding and erosion along the Lake Superior shoreline are typically a result of high water levels, storm surges, and high winds. During periods of high water, flooding and erosion are more frequent and serious, causing damage to homes, businesses, roads, water distribution and treatment facilities, and other structures in coastal communities. Roads, streams, bridges, and trails are also changing. These changes have already resulted in disruptions to traditional Anishinaabe lifeways such as fishing and Manoomin (wild rice) harvesting.

“We knew we needed to do something different than the usual approaches to hazard mitigation planning,” Rachael says. As they were thinking about a way to facilitate the planning process, one of Rachael's friends, and co-author of the Tribal Climate Adaptation Menu, shared this important written framework with her. “This resource completely grounded me and changed the way I do planning,” she says.

The Tribal Climate Adaptation Menu is designed to ensure that adaptation actions are culturally appropriate and community-supported. It was created based on Ojibwe and Menominee perspectives, languages, concepts and values, and was designed to be adaptable to other Indigenous communities, allowing for incorporation of their language, knowledge, culture, and history into the climate adaptation planning process. It was developed by the Great Lakes Indian Fisheries and Wildlife Commission, along with tribal, academic, intertribal and government entities in Minnesota, Wisconsin, and Michigan. Included in the Tribal Climate Adaptation Menu are guiding principles for engaging with tribal communities.

Rachael gave her planning team at the Western Upper Peninsula Planning and Development Region the Tribal Climate Adaptation Menu since she knew the entire team could benefit from the guide. She notes that the importance of ensuring the engagement process wasn’t extractive, and that there was reciprocity among all people involved. This became a theme throughout the planning process. “My team understood the importance of slowing down and ensuring our engagement was built on respect and reciprocity,” she says.

Relationships are another thread seen throughout this planning process. The plan reflects this, with several actions designed to build relationships with others in the region. Rachael points out the importance of having a relationship before you do any projects. “We were in planning discussions with Dione and other scientists at Keweenaw Bay Indian Community Natural Resources Department before the grant to FEMA was written to develop a work plan,” she says.

Rachael also attended community events and volunteered to help the Keweenaw Bay Indian Community Natural Resources Department with their food sovereignty initiatives, which include workshops on gardening. “These actions led to relationships and trust and people inviting me into their homes,” she shares. “So when it was time to help with the hazard mitigation plan, people knew me, and that helped a lot. As a planner, I am not the expert. I know the planning process. The Keweenaw Bay Indian Community Tribal Community was the lead in this effort, which was a relief because I don’t have their knowledge, experiences, and perspectives.”

Although there was an official planning team, everyone in the community had an opportunity to participate and provide ideas and feedback. Several meetings were held to receive feedback, and when meetings were not convenient for key knowledge holders, individual discussions were set up to gather their information.

One of the ways the team reached out to residents was through an online survey. There was also a paper survey available at community locations like the Tribal Center and Ojibwa Senior Center. They used social media to communicate about the development of the plan and the survey. The survey helped the team collect data on hazards, hazard impacts, and their locations. It also helped them get ideas on who has flood insurance, who has taken measures to protect their homes or community, how people like to communicate about emergency information, and on actions the local government could take to reduce future hazard damages.

The plan also assessed climate change impacts, such as extreme temperatures and precipitation. “We had a lot of back and forth with reviewing and obtaining feedback,” Dione says. This ensured that people had enough time and space to review, capturing their ideas correctly and making the plan accessible. This type of iterative review is not something that happens in typical hazard mitigation planning efforts, but it can make the plan more valuable.

The Tribal Climate Adaptation Menu helped guide the development of Keweenaw Bay Indian Community’s hazard mitigation actions. It was important that the actions protected all beings (human and non-human). Indigenous cultures consider beings in the natural environment to be elders and teachers who can offer humans valuable lessons. The plan contains actions to purchase land to increase connectivity and ecosystem biodiversity. Another action is to restore wild rice (not just important to community members, but also a food source for migrating waterfowl). The Keweenaw Bay Indian Community identifies this as a species of cultural significance; migration of Ojibwa to the area was tied to prophecies that they should move west until they found the “food that grows on the water”—wild rice, and there are historical accounts of wild rice and restoration in this area. Having it in harvestable amounts is paramount to preserving community culture.

Additional actions are focused on using green infrastructure to reduce stormwater runoff issues such as flooding and water pollution, shoreline stabilization to help reduce chronic erosion along Lake Superior, and an early warning system to forecast and alert boaters and beachgoers about seiches (storm surge).

Actions also are forward thinking and consider how to ensure their community is safe in changing conditions. For example, one of the actions is for food sovereignty: “The community can have safe, culturally acceptable, and nutritionally adequate diet through a sustainable food system that promotes community self-reliance and social justice.” The plan calls out the need for food sovereignty education and outreach initiatives to restore and strengthen these practices. There is an action to ensure the plan is updated regularly. There are also actions to help fill hazard data gaps so the community can do a comprehensive risk assessment including both qualitative and quantitative analysis.

Dione and Rachael are excited about the plan and how the process turned out, and reception of it was overwhelmingly positive. The plan was adopted and approved, and now the community is eligible for FEMA funding. The plan is already being integrated into grant proposals and other documents. Dione is working on several actions from the plan related to assessing shoreline erosion and flooding issues and filling data gaps.

“We are seeing huge value in going through the hazard mitigation process,” Dione says. “It’s opening up funding opportunities for us and increasing our collaboration among community departments. We had to review a lot of community documents, and it helped us in our analysis and in learning what other departments are doing that is related to community preparedness and resilience.” Rachael is also continuing to build and sustain her relationship with Keweenaw Bay Indian Community by helping them develop their climate resilience plan.