Coastal wetlands—our natural defenses—help protect coastlines by acting as a permeable barrier that slows waves and surge through friction and reduces flooding. 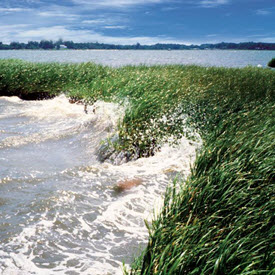 In the last 10 years, insurers paid more than $200 billion for coastal damages from storms globally.

Wetlands have been lost at alarming rates across the northeastern U.S. New York alone has lost 50 percent of its wetlands on Long Island Sound during the past 130 years.

Research from The Nature Conservancy says coastal wetlands prevented more than $625 million in property damages during Hurricane Sandy and reduced property damages throughout the Northeast by 10 percent on average.

With Hurricane Sandy, some places with few wetlands within their boundaries nevertheless benefited from the cumulative surge reduction provided by downstream wetlands.