By 2050, up to $106 billion worth of coastal property will likely be below sea level (if we continue on the current path). 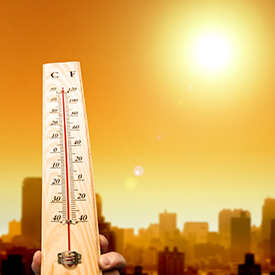 Over the next five to 25 years, greenhouse gas-driven temperature rises will likely necessitate the construction of new power generation that would cost ratepayers up to $12 billion per year.

Without adapting to the changing climate, some Midwestern and southern counties could see a decline in yields of more than 10% over the next five to 25 years, with a 1-in-20 chance of losses of crops by more than 20%.

The average U.S. temperature in 2017 was 54.6 degrees Fahrenheit—2.6 degrees above average—making it the third warmest year in 123 years of record keeping. Five states had their warmest year on record. Additionally, the five warmest years on record for the U.S. all have occurred since 2006. It stands to reason that these increases will continue each year going forward.

Factoring in potential changes in hurricane activity, the likely increase in average annual losses is expected to grow by $7.3 billion, bringing the annual price tag for hurricanes and other coastal storms to $35 billion.

Trillions Below the Sea

There is a 1-in-20 chance—twice as likely as an American developing melanoma—that by the end of this century, more than $1 trillion worth of coastal property will be below mean sea level or at risk of it during high tide.

If we continue on our current path, by the middle of this century, the average American will likely see 27 to 50 days over 90 degrees each year.

Report: The Economic Risks of Climate Change in the Unites States

(Risky Business is an initiative to assess the economic risks to the U.S. associated with climate change. The above report used a standard risk-assessment approach to determine the range of potential consequences.)