This collaborative project assessed vulnerabilities, risks, and mitigation opportunities for multiple hazards—earthquakes, sea level rise, and flooding—for Oakland’s Coliseum area and Alameda’s Bay Farm Island. The project was led by the San Francisco Bay Conservation and Development Commission’s Adapting to Rising Tides (ART) Program. Purposeful collaboration strategies and a diverse work group were a critical part of what made this effort successful.

The Adapting to Rising Tides Program distilled these lessons from their experiences:

Learn how stakeholders are using a collaborative planning process to assess their hazard risks, vulnerabilities, and mitigation opportunities.

San Francisco Bay, including the shoreline of San Leandro Bay, portions of the Cities of Oakland and Alameda, and the Oakland International Airport

– Lindy Lowe, Program Manager with the Adapting to Rising Tides Program at the San Francisco Bay Conservation and Development Commission 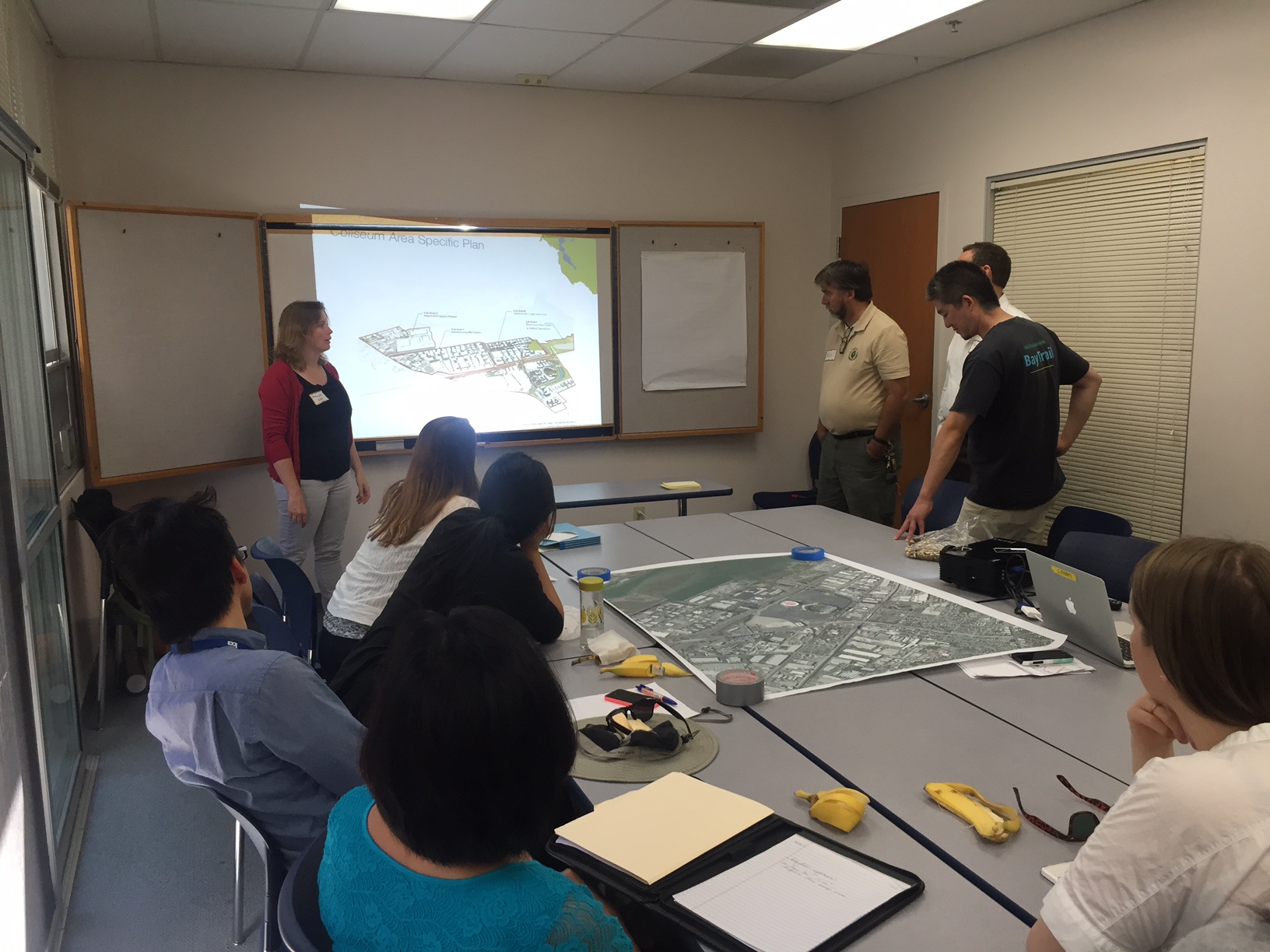 Stakeholders from the Start

To be successful across jurisdictions, geographies, sectors, and time frames, adaptation and hazard mitigation planning requires active and engaged participants and partners. For a San Francisco project, Lindy Lowe, program manager of the Adapting to Rising Tides (ART) Program for the San Francisco Bay Conservation and Development Commission, and her team developed a collaborative and outcome-oriented adaptation planning process. The process relies on convening and engaging a diverse working group of stakeholders from across the public-private-nonprofit spectrum. Lowe says, “Many of these organizations have not worked together, so the ART approach was developed to emphasize close collaboration and build the trusted relationships that allow both buy-in for the findings and for future action.”

The Adapting to Rising Tides Program team developed a preliminary project scope, including the assets and geography to be included and an initial list of working group participants. The working group requested that seismic hazards be added to the scope of the project, along with new members and several adjacent areas. The ART team sought out a partnership with the Association of Bay Area Government’s Resilience Program to add more capacity on the seismic issues, and the two agencies developed a joint work plan. The larger working group, consisting of representatives from local government offices, utility agencies, the Port of Oakland, community members, and government agencies, reviewed the work plan and final study area.

Once the project was scoped, the working group developed resilience goals. This critical step provided a foundation for further decision-making. Lowe says, “setting resilience goals early builds transparency into the project, sets the foundation for future actions and helps to determine where to focus project resources. Done correctly, the goals should reflect the four frames of sustainability—society and equity, economy, environment and governance.”

Project goals were focused on maintaining neighborhood and airport functions; building resilience in all phases of mitigation, preparedness, response and recovery; preserving environmental quality; and protecting the local and regional economy.

The planning effort included current and future flooding and earthquake risks, and identified efficiencies such as shared data and information. By combining the earthquake and flooding tasks, participants could more easily identify how adaptation and risk mitigation strategies for one hazard could be modified to address another, or how mitigation for one hazard could exacerbate the risk from another. “This work has meant that all of us, agency staff and stakeholders, have had to think and work outside our usual comfort zones, but the potential payoffs in terms risk reduction are huge,” says Lowe.

A “total water level” approach was used to better understand which areas are at risk to current and future flooding. Six water levels (1, 2, 3, 4, 6, and 8 feet), representing a combination of lunar and storm tides and future sea level rise, were used. The “total water level” approach allows people to see what both storm event and sea level rise flooding looks like for their area and begin to plan for near-term intermittent flooding, while identifying options for addressing future flood risk that could include permanent inundation if no actions are taken. Different assets have very different risks from these two types of flooding, and some are able to withstand temporary flooding, while others cannot. For example, a park may be resilient to temporary and intermittent flooding, since the park can likely return to its full function after a short closure and cleanup. On the other hand, the Oakland airport terminals or a senior care facility could be severely impacted by even short-duration flooding. The seismic risks included both ground shaking and liquefaction, and both are high risks for the study area. The mapping that was used to define these areas was from the United States Geologic Survey and the California Geologic Survey.

The questionnaire used by the project team to identify vulnerabilities, existing conditions, and consequences was also used to identify data and information needs. For example, if there were questions about existing conditions or stressors that could affect vulnerability, the information would be reviewed and revised by asset managers, owners, operators, and other topic area experts.

Make It Real, Get Out in the Field

The project team took two field trips to explore landscape conditions and geographic and functional relationships in the study area. Both trips included a driving tour, brief presentations at key locations, and tabletop planning exercises to help participants see and address the interrelated vulnerabilities in these geographies. Lowe says, “bringing everyone together in the actual locations to experience the challenges facing the communities, infrastructure, habitats and parks helped them understand each other’s concerns and what challenges they face. It also helped start a conversation about how they could work together to address current and future flood risk and seismic risk.”

The working group is focused on implementation with assistance from the project team. The Adapting to Rising Tides and Association of Bay Area Governments staff will also finalize and distribute project reports and materials.